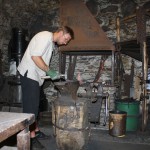 Four chambers of handicrafts have been operating in the cellars of the west bastion for quite some time now and here visitors can either feast their eyes, try to make something themselves or buy souvenirs. Renovation works began in 2005 in these dilapidated cellars that were once used to store gunpowder and other supplies. Enthusiastic people from the company Blacksmiths of Saaremaa, glass artist Eino Mäelt and potter Maila Juns-Veldre renovated and furnished the chambers for themselves and began to work in them in the same manner as their ancestors in the summer of 2006. 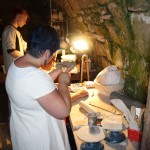 The smiths in the smithy make both commodities as well as souvenirs; it is also possible to order a specific object from the smiths. A fiery glass furnace is blazing in the glass studio in the summertime and here visitors have a chance to try their hand at the art of glassblowing. In the pottery ceramics are made either on the potter’s wheel or moulded with bare hands. About three or four times during the summer the big kiln is filled with workpieces, heated up and within 24 hours another batch of products is ready to be sold.

In 2011 a fourth chamber was set up in the water reservoir located next door with the funds of the European Union; it is the so-called stone chamber where an expert Taivo Parbus makes souvenirs of dolomite and introduces the art of stonecutting to those who are interested.

The bow range located nearby adds further excitement as in addition to shooting bows visitors can also produce coins with their own hands.

The chambers of handicrafts are open to visitors during the tourist season from May to August.