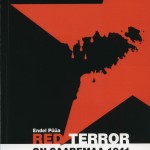 Editors note: As the Germans were occupying mainland Estonia in the summer of 1941, it became clear to the Communist military and political leaders on Saaremaa that eventually the island would also fall into German hands. Their response was to unleash an unprecedented terror on the people of Saaremaa. In this gripping book, Endel Püüa, director of the Saaremaa Museum, recounts in detail the horror of these times, and identifies with pictures the Russian as well as Estonian terrorists and their collaborators. The retribution by the people of Saaremaa, once the Germans had occupied the island, was swift and equally brutal. Historian Püüa captures this horrible time in first person accounts and in gripping pictures.