The nature collection is further divided into three sub-collections. 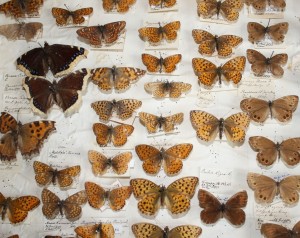 The biggest set is the insect collection of a Rannaküla landlord Theophil von Poll – it is a good example of the insect fauna of one region during a certain time period. Specimens were collected at the end of the 19th century and beginning of the 20th century.

The other big set includes bird eggs collected from Saaremaa during the first half of the 20th century. Two thirds of the objects in the large stuffed animal collection of birds and mammals are over a hundred years old.

Saaremaa fossils are best represented in the collection and T. von Poll has collected the majority of these at the end of the 19th century and at the beginning of the 20th century from Jaani Stage (mostly from Paramaja Cliff). The most valuable of the fossils are the Baltoeurypterus from Viita Limestone Quarry.

Rocks and minerals are not only from Saaremaa. These have come into the old collection of the museum from different places and also from outside of Estonia.

Rocks and fossils from the second half of the 20th century have been collected from different stages located in Saaremaa.

The majority of the collection is made up of a set of Saaremaa’s vascular plants. A Kuressaare pharmacist Valter Koost who collected plants from Kuressaare and its vicinity in the 1930s compiled the oldest herbarium in this set. One of the biggest herbariums comes from a pharmacist Julius Tõll who did his collecting mostly in the 1950s. The collection also includes wood samples, tree galls, lichens and mosses.