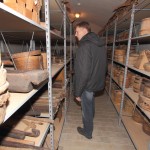 As a result of consistent and varied research, Saaremaa Museum is one of the leading research establishments in the county and a research coordinator, primarily in the field of history and local studies

Diverse collections that have been assembled over one and a half century and consist of more than 152 thousand museum objects (2012) serve as the basis for research. 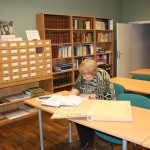 Researchers and scholars are most interested in the photo collection located in the building of the Archival Library of Saaremaa in the courtyard and in books, periodicals and manuscripts related to Saaremaa and the people of Saaremaa.

Scientific publications are one of the outcomes of the research done in the museum, the first of which was published already in 1866. Since 1993 the museum has published ten books called Saaremaa Muuseumi kaheaastaraamat (Biannual Books of Saaremaa Museum), which altogether include 3,120 pages, and six volumes of publications, the majority of which are still on sale. The works of researchers working outside the museum are also gladly published in these books.

A couple of research conferences are also organized every year.