In 2010 Saaremaa Museum started to practically implement its project Developing Kuressaare Castle as a Tourism Object, which is financed by Enterprise Estonia (EAS) under the measure Development of Cultural and Tourism Objects of National Importance of the support funds of the European Union (project no. EU31132). The Management Board of the EAS approved the project application of Saaremaa Museum on 17 September 2009; the total cost of the project is 60 million EEK.

The museum started with research and engineering design processes necessary for the implementation of the project already in 2000 when a vertical survey of the castle was carried out on the request of the National Heritage Board. During the following years the development plan of the castle was drafted and a lot of preparation work was done. Conservation and restoration project of the castle was completed in 2006, compiled by an architectural firm Restprojekt OÜ (architect Urmas Arike).

This is a complex project, which at first included nine bigger operations and sub-operations related to them. Some smaller operations were added later. Some of the operations have to do with the repair works and the development of buildings and facilities that are at the disposal of the museum: the outbuilding for outdoor events and the fire sprinkler system were reconstructed, the museum was equipped with a video surveillance system, a new chamber of handicrafts was built (stone chamber), the interior of the so-called Gunpowder Tower was renovated and the outdoor lighting system of the castle was further developed. In addition, two new permanent exhibitions are opened: in May 2011 a large permanent exhibition Saaremaa from 1950 to 1994 was opened on floors 3–6 in the Defence Tower of the castle; in September 2012 an exhibition depicting the communist massacre and terror of 1941 will be opened in the cellar of the Gunpowder Tower. 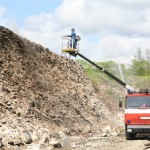 The biggest part of the project is the conservation and restoration of the bastion zone of Kuressaare Castle. During this the exterior walls of all curtains and bastions are preserved, the surfaces of bastions and their flanks are released from under the ruins, a new bridge is erected instead of the old causeway that runs across the moat, a new gateway is built on the seaward side and the gateway and the lower flank of the north bastion are completely restored. Three cannon positions will be reconstructed on the flank and cannons will also be placed there. 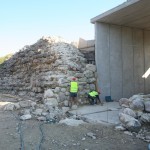 One of the biggest aims of this development plan is also to study the history of the castle and its architectural development. Comprehensive archaeological fieldwork will be carried out over the course of three years (2010–2012) and an archaeological firm OÜ Agu EMS will exercise archaeological supervision of construction workers. A new permanent exhibition dedicated to the history of the castle will be organized based on new information and findings unearthed during excavations as Saaremaa Museum does not have this sort of an exhibition yet. 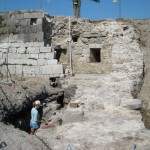 The research done during the first two years has already given a lot of information about the formation of Kuressaare Castle. There are 21 bigger and smaller excavations on the territory of the one-time episcopal castle and about 2,000 objects have been found from them. The oldest of these date back to the second half of the 14th century. 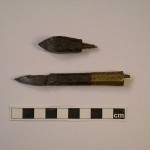 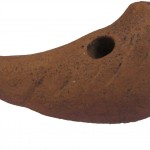 One other interesting find worth noting is a bird-shaped whistle that was found from several meters underground near the south-eastern side of the convent building. After having been cleaned, the whistle worked perfectly. Some clay whistles have been found from other Estonian cities as well and these have been dated back to the 17thand 18th century based on the things that were found together with them. 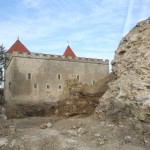 A few more operations were added to the project as a result of amendments proposed to the EAS in 2011: six cannons found from the moat of the castle in 1989 were preserved and these will be equipped with copies of real gun carriages; the so-called wooden arrow chamber located above the gate of the castle will also be renovated. In addition, the home page of Saaremaa Museum will be renewed and a new booklet will be prepared. 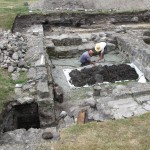 Most of the repair and reconstruction works have been successfully completed; conservation and restoration of the castle still continues. A big part of the exterior wall of the south-eastern curtain, the walls of the north-eastern and south-western curtain and the walls of the parapet of the east bastion were be restored by autumn 2011. Five more archaeological excavations were dug on the territory of the castle/fortress in 2012; these will be used to study the earlier construction phase of the main castle and the extension of the outer ward.