Permanent exhibition Saaremaa from 1939 to 1994 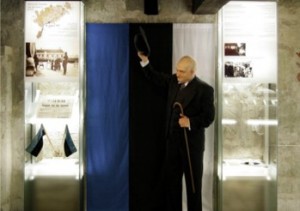 The permanent exhibition of contemporary history at Saaremaa Museum is made up of two parts. Exhibition Saaremaa from 1939 to 1949, launched in 2005, is spread out in three halls in the north-eastern wing of Kuressaare Castle. The first exhibit of this exhibition is a wax figure of Konstantin Päts, the first President of the Republic of Estonia, since his visit to Saaremaa on 20–21 August 1939 has gone down in history as the last large-scale political spectacle in Estonia before World War II.

The same room displays different materials about the invasion of the Red Army to Estonia, resettlement of Baltic Germans, the red revolution staged by the Soviet invaders and opposition to it as well as repressions during the first year of the Soviet occupation, which in Saaremaa culminated with bloodshed in the courtyard of Kuressaare Castle. Visitors can also watch a video chronicle from the Estonian Film Archives about Konstantin Päts’ visit to Saaremaa. 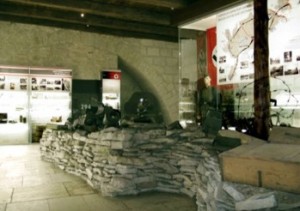 The biggest hall of the north-eastern wing of the castle gives an overview of the battles fought over Saaremaa during World War II in 1941 and 1944. In addition to materials that describe battles, there are also a lot of materials that portray the life of the people of Saaremaa in the rear of German troops. Visitors can also see video chronicles of Germany and the Soviet Union, although the chronicles of the Soviet Union are largely staged. In terms of museum objects, examples of the weapons of both sides and some rarities associated with the war are of especially great interest to visitors. Large-scale maps that have been compiled by comparing data from both sides enable visitors to get a good overview of the expenses of the war activity in 1941 and 1944. The exhibition tries to display the activities of both invaders as objectively as possible. 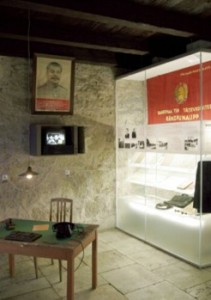 The third exhibition hall has been divided into two with an ‘Iron Curtain’. Both parts of the room depict a new beginning: some people started a new life as refugees abroad, others stayed here and were faced with the Soviet terror. The central piece on one side of the room is a small refugee boat with an exhausted refugee, which symbolises the beginning of a refugee life for those people of Saaremaa who went abroad. The other side of the room opens with a sword that was worn by an officer of the Soviet Army during the Moscow Victory Parade. The material on display shows the confusion that reigned during that time and in the middle of which every Estonian had to find their new place, regardless of where they were or which feud they were dragged into. Behind the desk of the first chairman of the first collective farm in Estonia one can see a propaganda film from the vaults of the Estonian Film Archives that was supposed to demonstrate the advantages of collective farms over single farms. A part of this video has been filmed in the first collective farm in Estonia, which was named after Viktor Kingissepp.

Being a tiny part of ‘one sixth of the whole planet’, life in Saaremaa was lived by the rules of the ‘mighty homeland’. Guidelines given by the dominating Communist Party in Moscow also made their way into what was then known as Kingissepp region and Kingissepp town through Tallinn. The implementation of decisions taken far away from here depended heavily on the eagerness of local leaders or on their sense of responsibility as well as on their ability to manoeuvre in the bureaucracy of the Soviet Union. The Soviet Border Troops, which were a part of the Soviet security forces, controlled the life of the people of Saaremaa for almost half a century. The strict border regime applied both to local people as well as to those who came to the island with a special permit. A propaganda film On the Western Border (1978), which glorifies the Soviet Border Troops, gives a good idea of the totalitarian nature of the system.

However, people needed to live their lives, even in the ‘prosperous conditions’ of the Soviet regime. Land needed to be cultivated and cows needed to be milked even in collective farms that were established in the fear of deportation. After having overcome the difficulties at the beginning of the period of collective farms, traditional sources of living, such as fishery and agriculture, gave the people of Saaremaa their daily bread as well as something to go with it. They would have given even more, had it not been for union wide limits/funds/norms/obligations that left only as little as one fifth of the products produced over here for the people of Saaremaa. The rest of the products were ‘paid for’ with red banners. A promotional film Fisherman of Saaremaa (1976) gives an idea of the life of Saaremaa fishermen. The film is very characteristic of the period in the way that it is made. 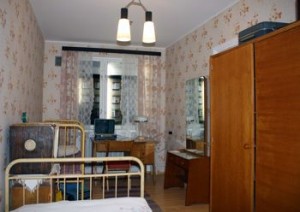 Regardless of the ruling regime, home has always been very important to Estonians and to the people of Saaremaa, be it then a separate house built with one’s own money and according to one’s own opportunities or a rental received from the state after having been on the list for a long time. The interior of the exhibition hall conveys the style and the feeling of a cramped house (so-called khrushchovka) from the 1960s and 1970s and tries to create the feelings of recognition or astonishment in visitors. Documentary Ice Tram (1964) deals with a topic that has been one of the most painful ones to the people of Saaremaa throughout the ages – connection with the mainland.

In Saaremaa the wish of the leaders of the Estonian Soviet Socialist Republic to immortalize their idol Viktor Kingissepp served as a prequel to the events that culminated with the Republic of Estonia becoming independent again and with fast changes during the end of the 1980s and at the beginning of the 1990s. In addition to photographs and museum objects on display, a 10-minute film Saaremaa 1998–1993 also gives an overview of the sudden resurgence of nationalism and fast political developments that followed these events. A film The Association of the People of Saaremaa in Toronto as an Upholder of Estonian Ideas (2008) summarizes the activities of the people of Saaremaa who lived in Canada, far away from their home island, during half a century.