The permanent exhibition about the history of Saaremaa is in the cloister of the upper floor and in two big halls. The access is from the entrance hall of the Watchtower by a crooked staircase. The exposition is opened by a huge oil-painting “Saaremaa” (1940) painted by Erik Haamer who was born in Kuressaare in 1908.
Most of the exhibits in the cloister tell us about the ancient history of Saaremaa. The earliest traces of human settlement come from Vőhma Village, Mustjala Parish and are about seven and a half thousand years old. The best-known monument of the Early Metal Age is the fortified settlement of Asva. The boat graves of Scandinavian type (8th century BC) in Lülle Village indicate early contacts across the Baltic Sea. Burial places, holy groves, cult and sacrificial stones help to understand the spiritual world of the ancient islanders. Numerous ancient sites and finds prove that islands of Saaremaa and Muhumaa were the most densely populated regions in Estonia in the 11th – 13th centuries. Tons of iron, smelted from the bog ore at Rauasaatmemäed, were used for making tools and weapons. These were used in the struggle against foreign conquerors at the beginning of the 13th century, in the ancient fight for independence, as well as later during the Revolt of St. George’s Night. 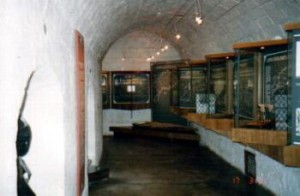 The first exposition hall illustrates the history of Saaremaa from the 14th century till the first half of the 19th century. One can see Kuressaare ferdings issued by Duke Magnus – the only coins coined in Kuressaare; law-books from the Swedish times and a map of Saaremaa that gives an overview of the geographical knowledge of that time; tools used in the 17th century; the map of Lőmala Estate from 1695, that exemplifies the reduction of the estates carried out by King Karl XI and by which the German noblemen lost 25% of their land possessions. The role of the church in the society at that time is illustrated by a massive collection box (probably 17th c.) and an item from the entrance of the church – stool of repentance or pillory, into which two “culprits” were fixed by their legs, hands and neck.

Saaremaa is rich in medieval monuments of art and architecture. The pearl of the exposition is “The coronation of St. Mary” (aprox. 1497-1500), an altar embossment carved out of oak tree presumably by the artist from Lübeck Henning von der Heide. We have no information about the original shrine the embossment was a part of, but in 1547-1791 it was a part of an old shrine in Kaarma Church. The virtuous way of carving and its festive monumentality of Kaarma embossment makes it a unique sample of Gothic woodcarving art that has preserved in Estonia and it has its outstanding place in North-European art. 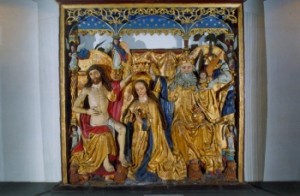 The Gothic sculpture is also represented by “Evangelist John”(school of East-Prussia) from about 1420; “Holy King with a cap” and “Holy King with a crown”. The two last evidently were parts of some shrine in some church of Saaremaa and made by craftsmen from Lübeck. The oldest stone carving is a trapeziform gravestone with the image of “the tree of the world” (12th-13th c.; restored in 1985). Such stones and fragments may be seen in several churches and graveyards of Western Estonia. The main detail of the stone is a slender pillar, out of which in the wider part of the trapez a motif of a diamond or a circular cross surrounded on all four sides springs out. In the narrower part of the trapezium the foundation ends with a geometrical ornament or with “roots” branching out into two directions. This motif could be called a “suntree” or “the tree of the world”, which upper part symbolises the Sun and the four cardinal points; the pillar is the axes of the world – the symbol of the eternity of the earth.

The oldest exhibits in the museum which author is definitely known are the wooden sculptures “St. John” and “St. Mary” from 1630. They were created by B. Raschky who was the oldermann of the craftsmen in Kuressaare for some time. He has also made the pulpits in Muhu and Karja Churches (respectively 1629 and 1638).

You notice the samples illustrating the system of justice: the badge of the court from the beginning of the 18th c., it had to stand on every court table, the handcuffs, a wooden board with a sign “Robber-murderer” that had to be worn by a convoyed convict, protocols of Kuressaare Provincial Court. From that period the museum has the oldest items made by peasants and now put out for visitors on a separate show window: a powder horn (1708), a bridal chest (1773), an instrument for hooping a barrel (1786), a jewel case (1800), a boring cutter (1807), etc. Photos depicting the everyday life of the country people and ethnographical materials are exhibited according to themes. You can have a look at the interior of a farmhouse and see a special disassembled bed from Saaremaa. 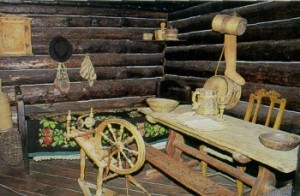 The first hall of the historical display ends with an interior of an estate lounge. It is possible to see furniture in Biedermeier style from the first half of the 19th century, half a century older grandfather’s clock “Denton” from England, a century old lampstand and wall decorations.

The exposition continues in the gallery of the upper floor, which takes us to the hall of the second department. There we find photos depicting educational and cultural life in Saaremaa in the 18th-19th century, some documents, books, items. The exhibition introduces the life and work of outstanding people in the field of culture once born in Saaremaa. Among the books exhibited we find: a bible from 1773, a song book from 1793, a catechism from 1797, a school reader from 1815, an ABC Book from 1853, and “Topographical data about Saaremaa” (1823) by J. W. L. von Luce. Among rare documents we find a copy of a handwritten newspaper “Arensburger Wochen- oder Intelligenzblatt” published by B. von Campenhausen in 1785; documents signed by Luce, a grade list from Kärla Parish School compiled by P. Südda. 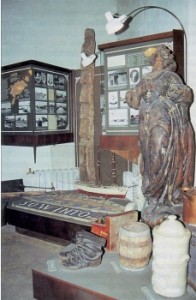 The second hall of the permanent historical exhibition covers the materials from the last fifty years of the tsarist period and the decades between the World Wars. This era was characterized by rapidly developing relationships of the market economy, the lawful basis published in 1865 in Kuressaare. 60 tsarist roubles – an average yearly paid rent of a farm, a contract of Laratsi farm, mortgage receipts and other documents and lawbooks. As an example of production – a metal spin of wheels made by local craftsmen, a carpet made in workshop of A. Sass at Leisi, peasants’ chairs, one with a humorous request “Be so kind and be seated”, some trademarked glazed tiles.

The sea has always played an important role in the life of the islanders. Major part of the exhibition is devoted to this topic and the following subtopics: shipbuilding, sailors’ life, sea transport, ports, smuggling, emigration. The most unique item is the two century old ships figurehead – the s. c. Mermaid found by accident in a trawling net near Harilaid shoal in 1977, the name-boards and models of sailing ships; special tools to gather metal from the sunken ships; a binocular for studying the sea bottom.

Three show windows and six boards cover the cultural life at the turn of the 19th and 20th centuries including the many-sided activities of Kuressaare Estonian Society founded in 1886. Besides photos depicting the activities of numerous choirs, ensembles, drama groups there are printed matters and some documents; the first newspaper “Arensburger Wochenblatt” published here in 1875, “Islander” (1884), “Voice” (1907) and old books (the oldest from the year 1864) and some postcards. There is a lot of material about World War I. You can see the weapons of both sides including Russian trench mortars from the years 1915 and 1916; mail from the islanders fighting on the frontier, some decorations of the Russian army, photos depicting battles in Saaremaa and many other things.

The part of the exhibition covering the history of fire-fighting is rather rich: The Kuressaare Voluntary Union of Firefighters founded in 1867 was one of the first in Estonia. The most interesting is a fire engine made here in 1830s which is the second oldest among the survived fire engines in Estonia.