SAAREMAA MUSEUM > Castle > History of the castle and fortress

History of the castle and fortress

The construction of the stronghold was closely connected with the Estonians’ fight against the German feudals. In 1227 the last Estonian county – Saaremaa surrendered to the German crusaders. A small feudal state was formed of Läänemaa and the West-Estonian islands in the years 1228–1234: it was Saare–Lääne (Oesel–Wiek) Bishopric with the territory of about 7600 sq. km. The centre of the bishopric was Haapsalu since 1265. The impact of the foreign rule on the island was not so strong and the islanders maintained some privileges.

The stronghold of the bishop in Saaremaa – Kuressaare Castle-Fortress (Arensburg) is one of the most interesting and best preserved fortification structures in Estonia. Contrary to numerous other Estonian medieval castles Arensburg survived the Livonian War (1558–83) and continued to develop under its new owners. In the early 17th century at the latest the medieval Konventhaus and the surrounding walls became a fortress with rampart fortifications and bastions, which was gradually modernized during the following couple of centuries. Fortunately this process proceeded relatively peacefully and very rationally. Wherever possible everything that had been built earlier was used but not demolished. As a result the Kuressaare fortress has become a peculiar a crosscut of the development of different fortification ideas and theories from the 14th to the 19th century, which is noticeable in the whole Northern Europe context.

The building of the oldest part of the fortress, the Konventhaus-type main castle, started some time during the first third of the 14th century and it was completed along with the first surrounding wall towards the end of the same century. Only an underground part of that surrounding wall has survived, and its southern corner has been dug out and exhibited.

Being the second centre of the Bishopric Oesel–Wiek, the Arensburg fortress developed rapidly. Large outer wards were built to the land side of the fortress in the course of which the level of the ward was significantly raised. By the middle of 16th century the whole territory was already surrounded by the wall with at least one large and six flanking towers. That surrounding wall is visible in long stretches in the yard of the castle. Of the towers the Gunpowder Tower that was rebuilt during the Swedish period has survived and in the northern corner the Cannon Tower was once again built up in the 1970s. The East and the Southeast Towers that were dug out in 2010 and were then conserved have been preserved in their best shape.

In 1559 the last bishop, Johannes V Münchhausen, sold the Kuressaare fortress to the King of Denmark. It was in the Danish period that the most principle change took place: the medieval castle became a fortress. The first bastions and curtains were built and were surrounded by a new moat. Even the building of a bastion belt surrounding the city began, but only two bastions on the north-east boundary that have disappeared by today were actually built.

Of the Danish period building works, the outer wall of the southeast curtain, and partly the outer walls of the northeast curtain as well as the North Bastion have been preserved best. The walls were built of limestone and partly of granite and they are somewhat higher and with a bigger slant than the later Swedish period walls. A then flanking gunpowder position has survived nearly in the initial shape, and has been conserved and is open to visitors.

Under the Brömsebro peace treaty signed on 13 August 1645 Saaremaa passed to Sweden. There is no information about the number of inhabitants in the castle during the reign of the bishops, but some figures date from the later period. During the fiscal year of 1618/1619 the castle employed 47 different clerks and servants, 50 mercenaries; 36 soldiers and 8 armourers among them. In 1623 there were 116 cannons in the castle. In 1645, in the state of war the garrison was considerably bigger: when the Swedes took over, there was an army of 850 mercenaries and 800 peasants.

Very soon reconstruction of the fortress began. The most extensive building work took place in the last quarter of the 17th century and continued until the Northern War. Under the leadership of Erik Dahlberg, the famous fortifications’ engineer, the bastions of the fortress were built bigger and were provided with lower flanks: a new southeast curtain about three meters thick and partly new northeast and northwest curtains received new walls.

The fortress was surrounded by a new moat where also three ravelines were built. It was in the Swedish period that the fortress received the appearance as we know today. Only the North Bastion remained unbuilt. The Swedish period works had been thoroughly planned and carried out. Either earlier or later work at the walls had been made so regularly and with high quality.

In the course of the Northern War the Kuressaare fortress received major damages. On September 8, 1710 the Swedish garrison, ravished by the plague, surrendered to the Russian army with no resistance. But in April 1711 Russian troops mined the fortress and blasted its bastions as well as the Cannon Tower. The buildings were set on fire. The fortress remained in ruins for decades and the convent building was left to its fate for about half a century. In 1762 the south-western and north-western parts and in 1806 the north-eastern and south-eastern parts got a new roof, new vaults were erected in the cloister of the main floor. The demolished upper floors of the Defence Tower were taken down in 1791. Some of the rooms were used for storing grain in the XVIII and in the first half of the XIX century. In 1783 the convent building was excluded from the list of the fortifications. 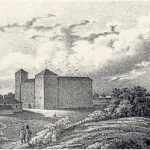 Restoration work started only in 1788 and lasted until the change of the century. In later decades regular repair and maintenance work continued. No principled modernizations took place during the Russian rule. Probably, the biggest changes were building of the lower flank of the North Bastion and putting up new garrison buildings. The lower flank of the North Bastion has by today fully restored and is open to visitors. Even the cannon have been placed on their positions like they could have stood there also a couple of centuries ago. The preserved garrison buildings, however, are in the use of the Saaremaa Museum.

Due to the changed political situation the Kuressaare fortress lost its importance in the first half of the 19th century. In 1834 it was crossed out from the list of Russian fortifications and a couple of years later it was sold to the Saaremaa Knighthood. Civil service of the Kuressaare fortress began. Over the decades a number of different institutions were situated there and the fortress became a popular place of rest for the citizens and visitors. The outer walls of the fortress were used as a convenient stone quarry, which was of assistance in the building of stylish stone houses in Kuressaare.

Starting from 1997 the whole territory of the fortress is in the occupancy of the Saaremaa Museum, while only the ravelines in the moat belong to the city. The convent house has permanent exhibitions of the museum and its rooms are used also for carrying out various functions. The 18th century garrison buildings house the museum office, depositories and an archive library. There are smaller permanent exhibitions also in the medieval Gunpowder and Cannon Towers. Handicraft workshops in the West Bastion gunpowder cellars have become very popular among the visitors – a smithy, glass, pottery, and stonework workshops. Today the yard of the fortress has some of the most significant open air events.

In the 20th century the fortress has been repeatedly restored. In 1904–12 the convent house was thoroughly repaired under the initiative of the Saaremaa Knighthood. Under the direction of architects Wilhelm Neumann and Hermann Seuberlich the two upper floors of the Defence Tower were constructed anew; the window frames in the cloister of the main floor were restored and the wall between the chapel and the festive refectory rebuilt; some of the doors were relocated and windows widened; new ovens and staircases were built; stone plates with the coats-of-arms of the local noblemen were mured into wall of the cloister. The main floor was re-designed to serve as the office and the festive rooms of the knighthood; a bank and an archive were installed in the basement, in 1913 a museum was situated on the upper floor.

In 1970 to 2000 the front side of the fortress was restored from the East to the North Bastion as well as some stretches of wall in the grounds of the fortress. The convent house passed a thorough renewal, which (theoretically!) received back its medieval appearance. The most fundamental work was the restoration of the original roofs and the defence gallery, building the new intermediate ceilings, building a concrete staircase into the Defence Tower and re-shaping the widened windows.

The last and the most capacious period of restoration was in the years 2010–15, when under the measure Development of Cultural and Tourism Objects of National Importance of the support funds of the EU most walls of the fortress which so far had been buried under refuse, were cleaned out and conserved. By this the fortress was given back its earlier architectonics and different pages of the long and complicated development story were visible to interested parties.