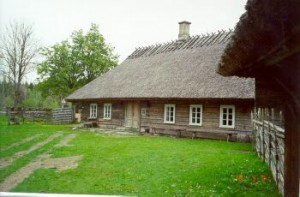 On the western coast of Saaremaa, 3 km from Kihelkonna towards Kuressaare one may find a peculiar museum – Mihkli Farm Museum. There was no need to gather things into this farm: the complete set of farm houses and all kind of things needed in every-day life were there. Almost all the things have been made by the people of six generations living there during two centuries. You can see historical exhibits in their historical environment. Mihkli Farm Museum was born on Feb. 5, 1959, when the last owner of the farm became the first employee of the new museum after having handed over all the buildings and everyday commodities to Saaremaa Museum.

By design Mihkli farm is a typical Western-Saaremaa farm, which is interesting from the point of view of various planned buildings. The dwelling-house and other houses form a circle round the farmyard that is divided into two by a rail fence forming a nice flower garden. The farm is surrounded by old white ashes, which branches were used to feed sheep in winter. The big orchard was started by Karl Reht. The earlier straw roofs were substituted by thatched roofs in the 20th century. Reed was perfect raw material for roofs in the coastal villages, while straw was used elsewhere. 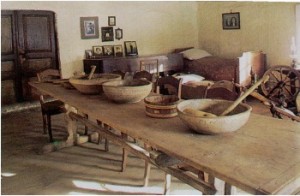 The exposition begins at the gate with the dwelling-house 1 , presumably built in 1834. Before that people lived in the old barn-house that was located where we find a flower-garden and a summer kitchen now. The dwelling-house has no foundation and is built of beams, the roof is half hipped. In the middle of the building there is a kitchen with a chimney hood that has stone walls and vaulted ceiling. It is possible that some example has been taken from Latvia. This kind of village architecture is only in the western and northern parts of Saaremaa. Near the entrance you see a historical exposition, there are chambers on the left and in the front; on the right there is a living room and a chamber. It was possible to heat only the two last rooms at first, the opening of the oven was in the chimney hood. The walls of the kitchen are covered with thick soot deposited during many years. When the stove was heated the kitchen was full of smoke that was directed into the chimney through the openings above the door. If it was necessary to keep the smoke in the room longer (to smoke meat), then the openings were closed by wooden shutters. Here you can see the baker’s peel and the vessel in which the dough was mixed. In the living-room you see several items of everyday life: the loom, the eating table with soup or porridge bowls and dishes, beer mugs (the oldest from 1816), fish and butter boxes. Many items have the sign of the family on it: the oldest Mihkli farm had a plain cross. The oldest exhibit is a sowing tray from 1788. Later a chamber was built to extend the northern end of the house and the date carved into the wall shows 1864. The window and door openings were widened 1/3 by Karl Reht in 1893.

Next to the dwelling-house we see a small house built of stone and wood called the house of wheels 2 Woodwork was done here and the vehicles kept, hence the name. Among the vehicles you see two prams; one bought and the other one self-made.

On the southern side of the yard there is a barn-house 3 erected in 1840-43, a saw was already used as a tool then. The biggest building of the farm consists of a large room with stone walls. The room was used for threshing grain. The barn-room and the stables are built of beams. In 1861 one room was built, where the bee-keeping equipment could be stored, on the doorjamb there are the initials of Peeter Reht. As there is a separate dwelling- house on the farm, the barn-room was not used for living. In the barn-room you may see the poles supported by beams, underneath the threshing benches; a flax brake by the wall, a flax-machine with cylinders from the end of the 19th century; next to the stove a wooden spade for crashing chaff added to flour, a wooden rake for separating grain and chaff and a poke. In the threshing-room you may see a field-roller, a primitive wooden plough and a mouldboard plough; a broom for brushing off chaff in winnowing and flails. Some items exhibited are brought from elsewhere: a truck “Gaz-AA” produced in the Soviet Union; grain threshing equipment from Finland, a winnower and grain sorting machines, and so on. In the former stables you may see vehicles: the most interesting is evidently a wickerwork potato-wagon and a beam sledge. 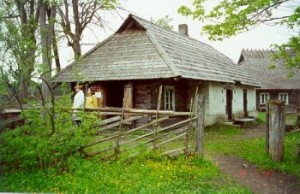 Opposite the barn-house there is a stone house with a wooden plank roof from 1854 where you find a summer kitchen, a smithy and a wooden brewery 7 . The most interesting are the medieval ashlars used by building of this house: a bowl for holy water, a vaulted console, clean-cut ashlars. Some pieces of tiles have been put into the walls of the house of wheels already in 1849. It is possible that the stones come from the old Kärla Church, that was taken down in 1836.

There are two storehouses on the farm: the old and the new building 5,6 . The oldest of the preserved buildings is the storehouse in the orchard dating evidently from the turn of the 18th and the 19th century. It was built when a saw was not known as a tool yet. This storehouse was used for storing grain and apples.

The new storehouse was probably built in 1842. The proof is the date on the doorjamb of the clothes storehouse and on the wall of the fish-house. The new storehouse has several chambers: in the middle there were special rooms for storing grain, meat, fish and clothes. In the side chambers girls used to sleep in summer.

In 1846 a sauna-bath 4 was built in the orchard, its wooden parts and interior design date from 1910. Some hundred metres away from the group of buildings you may see the farm’s windmill, that could be turned as the wind blew. It was built on the new recreation site belonging to the museum in 2001. (The old windmill of Mihkli Farm was destroyed in a fire in 1994.) 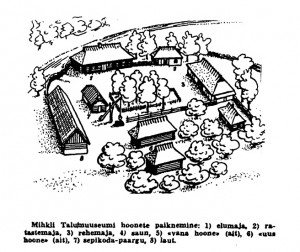