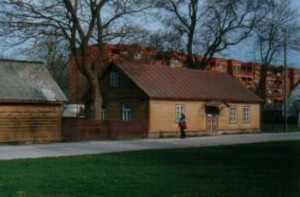 At the end of the 19th century the house and real estate at 9 Sepa Street (later 7 Vallimaa St.) belonged to a gardener Johann Brenner (1834-92). After his death the real estate was bought buy a tradesman from Kuressaare Jakob Aavik (father of Joosep Aavik) for his brother Mihkel Aavik (father of Johannes Aavik). On April 1, 1896 Mihkel Aavik moved in with his wife Ann (1849-1918) and their children Aadu, Liisi and Juuli. Johannes Aavik lived in his parents’ house as a pupil in1898-1902 and later, when he worked as a teacher of Estonian in Saaremaa Gymnasium in 1919-1926. After the parents’ death sisters Liisi (1885-1949) and Juuli (1890-1959) took care of the house. From 1961 till his death in 1989 the house was Joosep Aavik’s home. On June 19, 1992 the house was opened as Johannes and Joosep Aavik’s Memorial Museum, being a branch of Saaremaa Museum.

The outstanding philologist Johannes Aavik was born in Randvere, Pöide Parish in 1880. He graduated from Kuressaare Gymnasium in 1902 and studied philology in Tartu University (1902-03), in the Institute of History and Philology in Nezhin (1903-05) and in Helsinki University (1906-10). He worked as a teacher of French and Estonian in gymnasiums and Tartu University and as the counsellor and the chief inspector in the Ministry of Education.

Johannes Aavik’s life achievement was innovation of the Estonian language – unique in the world as far as its grasp and influence are concerned. During the most active period of innovation in the language (1912-26) he suggested new approach to the language structure and enriched the vocabulary. He created many new artificial words and suggested to introduce new borrowed words from Finnish and Estonians dialects. J. Aavik demonstrated his innovations and new vocabulary in his literary translations. As a teacher of Estonian he published writings discussing methods and practical language problems.

In 1944 Johannes Aavik fled to Sweden with his family and continued his prolific philological activities there. Johannes Aavik died in Stockholm on March 17, 1973 and was buried in the Forest-cemetery.

Joosep Aavik – a music teacher, conductor of choirs and organist was born in the family of a Kuressaare tradesman on Nov. 17, 1899. He graduated from Kuressaare Gymnasium in 1919 and continued his music studies at the Higher Music Schools of Tallinn and Tartu. In 1927 he graduated from Tallinn Conservatoire as a composer and worked as an organist and a conductor of choirs in Tartu University. In 1929 he came back to Kuressaare and started to work as an organist in St. Lawrence Church. Since 1930 Joosep Aavik was closely connected with the cultural life of Saaremaa: for more than fifty years he worked as a music teacher in the gymnasium and music school and as a conductor of the orchestra and organist. He was the main conductor of song festivals several times. He has also created music. Joosep Aavik died in Tallinn on Nov. 20, 1989 and was buried in Kudjape cemetery, Kuressaare.